I’m glad pictures and movies can help when words can’t describe such a fantastic day! 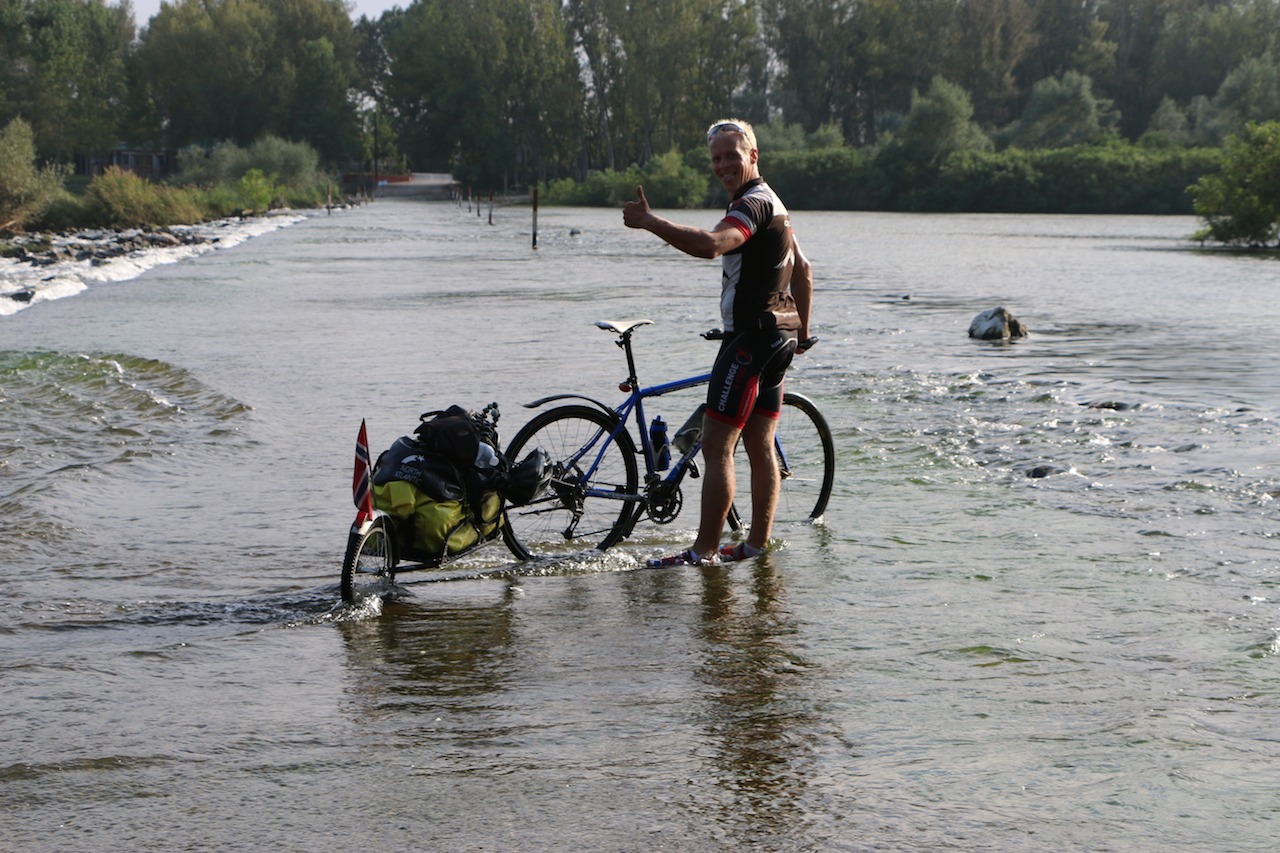 We’re ready for some boarder crossings again. Imagine that, I’ll cycle into country nr 19 and 20 out of 20 of my trip today. The only thing remaining after todays ride is some kilometers in Turkey and Bulgaria. We are ready for some restitution days in Edirne.

It’s time for breakfast here at our vineyard. It’s still full party and techno music on maximum volume in the restaurant. We order some breakfast, but it’s nothing special. Not very healthy and to be honest, not very good start for cycling. We receive an omelette with a special horrible cheese and a pommes frites…PERFECT? Nope!

We have decided to enter Greece today. It’s only 4-5Km to the boarder and we will follow the Greece/Bulgarian boarder all the way. Since we plan to enter Turkey at the end of our day, we need to get a hold of the visa. Lillian helps us to apply and sends the visa to my e-mail. Now we need to look for a printer….

Cycling a little bit around in the streets of Ivaylovgrad. I can see a store with Konica Minolta on the wall. They must have a printer available. Closed door!!! The neighbour tells me that it’s not open until tomorrow. I try do explain what we need by using simple words and hands. Edirne, Turkey, visa, e-mail and printer. He speaks with a women passing through the streets. She pulls up a key and open the store for us. I’m able to explain to her what we need by using some german and hands. Finally, we’ve got it. Thank you! 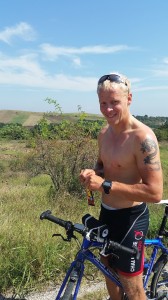 My mom is gone. The bicycle is left on the outside, but where is she? I can see a garage on the other side of the streets. I hear a woman speaking english. There she is! She’s standing there with a guy who is showing her an old veteran car from Russia. and a car driven by wind.

We’re on the road. Cycling towards the Greece boarder. The weather is really nice and you can already see a difference in the landscape, even on the Bulgarian side.

At the boarder crossing. My moms first. Country nr 19 for me. We give them our passports, tell them where we’re going and are waiting. They are standing there with a gun on their hip. They seem friendly and have a smile on their mouth. Everything takes some time. My mother asks me if this is normal. I reply that it is different from place to place, but that she shouldn’t be afraid.

Finally we’ve got the passports and a good to go. We’re on the road after taking some pictures with the Greece sign.

It’s totally different. We’re cycling from roads and fields filled with garbage. No system for their trash. Entering Greece gives a good feeling. It’s so clean. You get a feeling that even the cropped fields looks in better shape. First thing that hits us is better economy, but we know that Greece have been, or is in a economical crisis. Maybe they have better equipment from before, better knowledge or maybe better land? Who knows? I can guarantee you one thing…I don’t! I’m just facinated about all the differences from country to country. 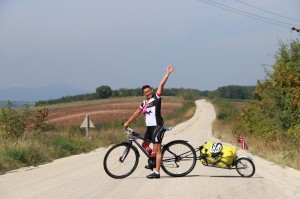 The buildings are just as you could imagine they would be in Greece. White with a small contrast color around the windows. You can hear the clocks from the school yard informing the kids that it’s time for a break. You feel a calmness and a safety. I’ve never felt unsafe in Bulgaria, but you’re walking there and are looking a little bit over the shoulder, you’re thinking a bit of where you stop, or where you place your bicycle. I don’t get the same feeling here. You can see a smile on peoples faces in the streets. A old woman is waiving and says hello when she passes me on her way home from the store. I love this feeling, this relaxing feeling.

We stop several times to take pictures today. It’s so beautiful around here, even if it’s just flat land. It’s so clean, I just love it!

Cycling through several cozy villages. We learned something that we knew already. SIESTA!!! It’s not easy to get a hold of food. We’ve filled up our bags with chocolate, some energy drinks and water, so we’re fine.  We stop at a small cafe to have a coca cola and a fanta.

Continuing further. It’s definately the best day of my moms ride so far. She’s smiling from ear to ear. Everything is perfect. Even when we end up on a gravel road with only the river between us and Bulgaria, she’s smiling.

What is this? My head is thinking and thinking. I’m wondering how we will cross this road. It’s flooded! Not with still water, but there is a river running over the road. Probably strong currents. My mom looks 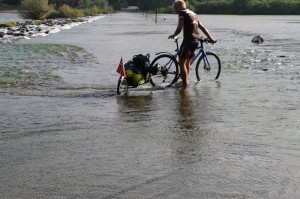 at me and have no idea of whats happening. She believes that I stop for a photo, but quickly realizes that this is the crossing. I’m looking at the map to find an alternative, but there is none. What to do?

I tell her to hold the camera, I want to have a picture while I’m trying to cycle over. I’m able to cycle 3 meters before the strong current and the slippery surface removes my wheels from the road. I’m able to put my feet to the ground before hitting the asphalt. I’m saving my bike, luckily the bottom bag is 100% waterproof. I’m just laughing. We have to walk there is no alternative.

We’re giving it a try after I’ve tried to motivate my mom for this. We will have water above our ankles. We’re slowly walking. The current is so strong that we have to take small steps, it’s trying to move our bicycles and our feets. The road under the water is covered with green slippery grass.

Finally I’m over with my bicycle. I’m walking back to my mother to help her with the bike. We’re finally over. I’m not able to get a smile on my mother right now. She seems a bit shocked and maybe a bit tired after these exhausting 300 meters, which took us about 30-40 minutes to cross.

We’re back on the bicycle. She’s able to smile again, and are laughing with me about this experience. She’ll realize later that this is the type of experiences that will make a good story even better. 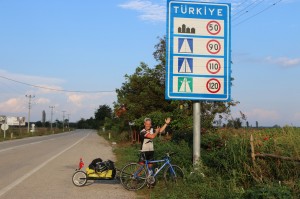 So many impressions today, and we still have the boarder crossing to Turkey left. Cycling into Edirne won’t be any worse. How can we be able to describe all this in writing? I’m sorry, but I’m not sure if I will be able to describe this as good as you deserve to get, but I’ll try my best.

Boarder to Turkey. First stop seems easy. We give the Greece police the passports and they wishes us a good trip and says goodbye. We’re cycling further. Suddenly we’re in the middle of two barbed wired fences.

Close your eyes and imagine cycling in between some of the fences you’ve seen in an american prison movies. There’s just space enough for 2 cars. We feel like cycling into a prison. When you’re looking on the inside of the fence, we realize that it’s a military zone. Military personell are standing there with huge rifles. We’re cycling further and are getting to the end of this prison walk. At the end there are two fully armed guys from the military. The rifles are huge. They look at us and are pointing us in the right direction.

Turkish boarder control. Will they let us in? He looks at our visas and passports. Smiles and wishes us a good trip. Next is the

customs. They are laughing when they see us. You can see that they are discussing if they should bother to check us or if they should let us go further. They took the easy way, just asked us if we had any alcohol. When we replied no, he just touched our bag and said go on.

I can just imagine the feeling my mother have. Crossing boarders like this for the first time of her life. And she felt like she were in a war zone in Krumovgrad, how does she feel now? At the same time a military truck is passing us. You can see that the back part of the truck is filled with armed military personell.

We’re stopping for a picture at a Turkey sign and are cycling further. The standard feels like it’s falling down compared to Greece. But in other words you can also see the huge complexes and mansions, at

the same time you can see toothless old ladies sitting with their corn on the streets, trying to make a living. We get a feeling that there is a huge difference between rich and poor in this area.

Cycling towards Edirne. Cars are passing us, waiving with a smile on their face. We’re just looking around, looking at everything and nothing at the same time. We’re looking at each other and are smiling. You can see the huge mosques in the horizont as we are cycling over the beautiful stone bridges. We are ready for two days of fully restitution. We’re spending the night at a hotel with a spa area, and are planning to have a full massage tomorrow.

We’ll spend Tuesday and Wednesday here in Edirne. Tuesday is reported to be full of rain and extreme weather. Wednesday will be the day that we’re going to the centre and are taking pictures, can’t wait to show you. We have 3 days of cycling left. Thursdays ride will take us to Kirklareli in Turkey. 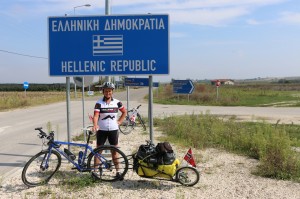 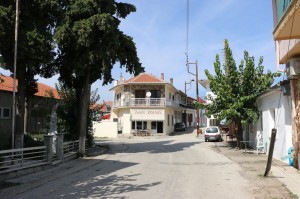 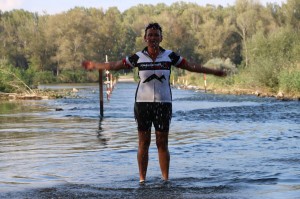 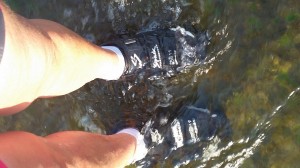 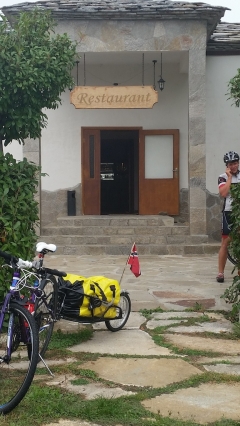 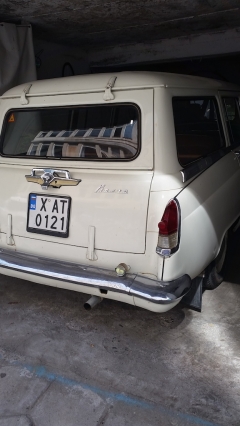 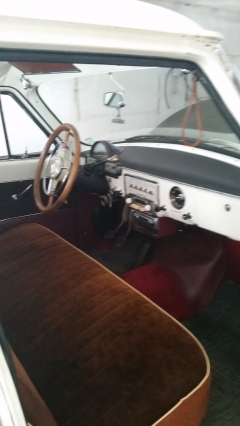 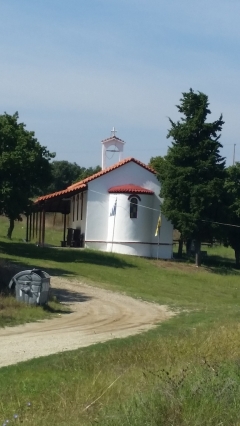