Cycling from West Germany to East…The difference hit me in the face, HUGE!

This morning I woke up to the sound of the rain hitting my tent. It’s my second day on the bike alone. I will cross over to east Germany and cycle on the boarder itself.

It’s early morning. I’m awake when I get an sms from Lillian, she’s wishing me good luck with the trip today. She is on the boat from Kiel to Oslo now.

There are quite a few other cyclists on the camping. Some of them started their trip yesterday and told me that they’re cycling to the boarder to Denmark.

I must be honest and say that sometimes I feel a bit uncomfortable when people have told me with a proud face about the trip they are doing and then asks me about my trip. You can see their face is changing. They should be proud of what they are doing, even if they cycle for just a few days. It is a good thing to do. But I guess that it’s just a part of me that don’t want to disappoint others. It’s not everyone that gets the opportunity to do a 4 month trip.

The tent is soaking wet when I pack it. It’s packed in two parts today, the innertent in one bag and the shell in another. I put a plastic bag on both of them to make sure that it doesn’t make my clothes and electronics wet.

I cycle back towards the bridge to get to the other side of the river, but first I stop for some breakfast at a bakery and then filling up my bag at a gas station, it’s sunday you know!

The road quickly takes me from Lauenburg in West Germany to Boizenburg in the East. The difference hit’s me in the face. The buildings are 100% different. You can also see that the amount of money available is higher in the West.

I follow the river Elbe all the way and are basically cycling on the boarder. You can see the watch towers on both sides of the river. The river that many people tried to escape by swimming from east to west. I read on a information sign that the soldiers that shot and killed people trying to escape got a bonus in addition to their normal salary.

The cycle path is following the old roads as you can see on my pictures. It’s much better quality than I expected and there is a lot of cyclists that follows the river.

I meet many people today. The weather became a bit better during the day and I speak with several friendly people. Some of them tells me stories from the history here.

Mentioned by a cycling german today:
I believe it will take about 2-3 generation before we truly are one Germany!

Cycling further towards Dömitz, which is a nice small town. I didn’t find any camping and decided to stay at a «Bett and Bike» which Tom, one of the guys following the trip mentioned. This is a bicycle friendly hostel or pension.

The lady that meets me are smiling from ear to ear. I’m allowed to put my tent up for drying, then I’m ready for a nice and warm shower.

I walk around to take som pictures and to get some food. At first I stopped at a small cafe/restaurant and ordered a steak. I started eating and saw that the steak was completely raw. He took it back and came back with the same steak, but then I found a small animal walking around on the plate and in the salat… I LEFT!

The city seems 100% quiet and I start to wonder how they can live. I can’t find any stores or other restaurants. I walk furter down to the river and find a place they call Hafen. At this place it was more life and even a possibility to buy some food.

I end up at a pizza restaurant and buy a Turkish pizza…AMAZING! I have a beer while writing some blog posts and just relax.

Later in the evening I drop in to a bar and listened to some live music and relaxed. At this place I met 3 friendly people from Germany. They are also out cycling and it turnes out that they live at the same Bett and Bike as me. I spend the rest of the evening with them.

I’m ready to sleep after a phone call with Lillian.

Good night, see you next time! 🙂 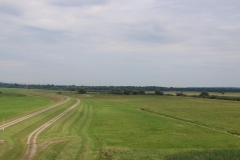 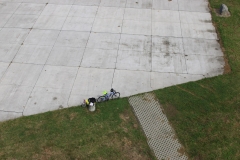 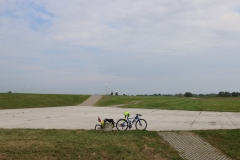 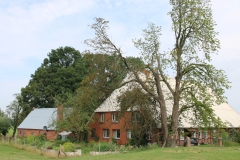 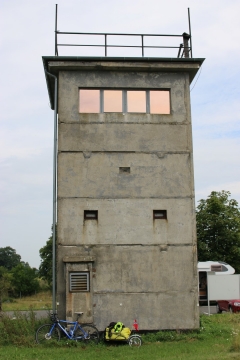